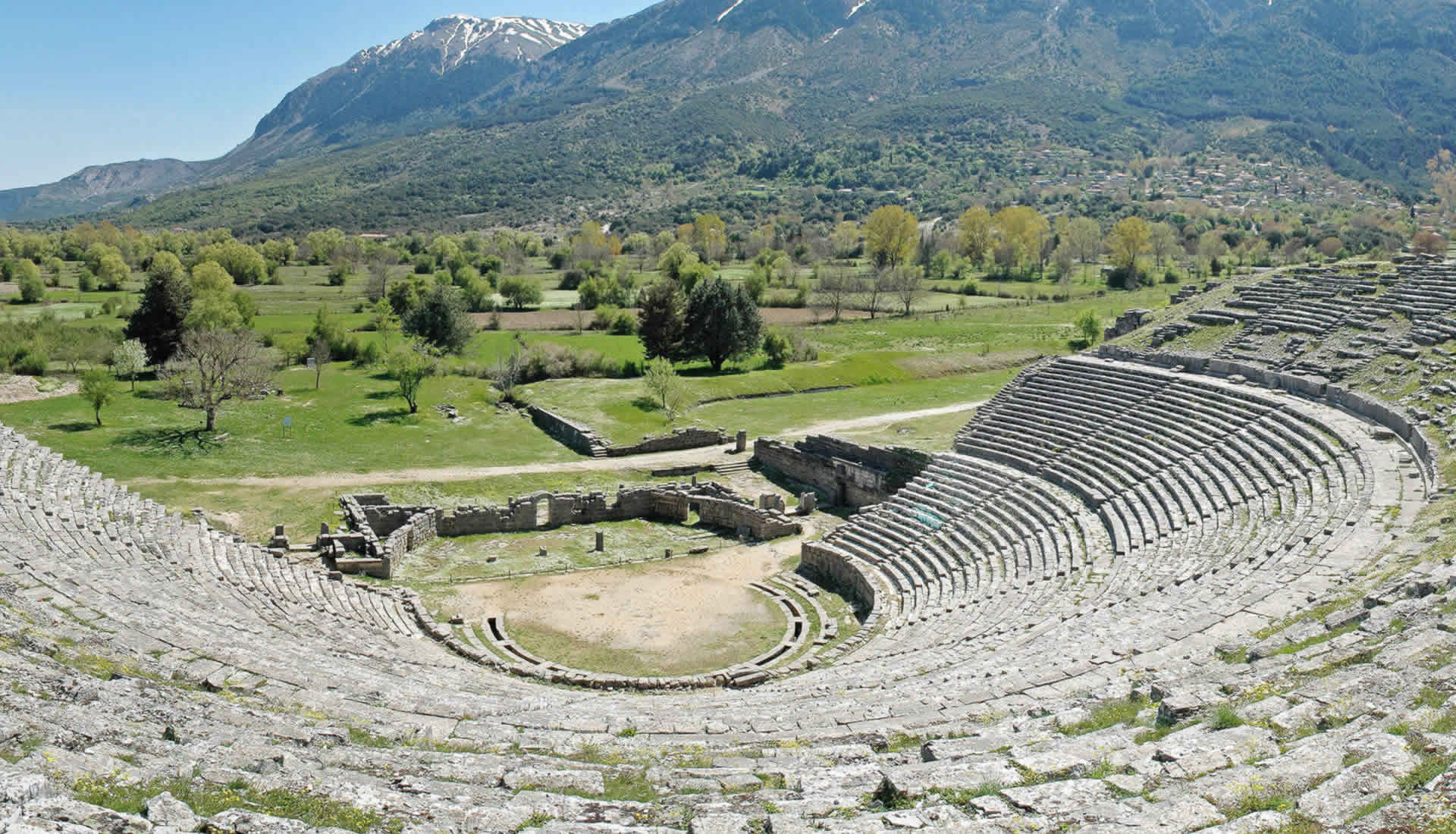 Ancient Dodoni was a worship center of Zeus and Dionysus. It was also known as the oracle of the ancient Greek world. It is located at about 2 km from the settlement of Dodoni and lies in a closed, long valley, at the foot of Mount Tomaros, at an altitude of 600m. There are many references to the naming of the historical name Dodoni. Some believe that  it comes from Zeus, the main cult of the oracle, while others believe that it comes from the Daudon nymph and others from the verb “Dodo”, which means a bumblebee and others from the verb Dedomy, meaning rich and fertile because the plain was full of fruits that it gave to the people.

Dodoni as an archaeological site according to archaeological evidence is reported to be active from the Bronze Age, focusing on the worship of Gaia or another female fertility deity. Jupiter’s worship was introduced to Dodoni later by Selles, while it evolved in a short period of time into a dominant worship.

The earliest evidence of the existence of the oracle of Dodoni as a cult place dates back to 2600 BC. It is the oldest oracle that is found in Greece. Herodotus mentions two myths about the founding of the oracle, one that the Phoenicians seized two women from Thebes, and sold one to Libya and the other to Thebes, and these two women founded the corresponding oracles in the Temple of Zeus and in Dodoni. According to the other myth,  two pigeons flew from Thebes of Egypt: one landed in Libya, where the temple of Ammon Zeus was built, and the second came to Dodoni, where the oracle was founded.He stated that he was told the second story  by the three priestesses of the Dodonian oracle, the names of whom were Promeneia who was the oldest, Timareti the second oldest, and Nikandris the youngest. From the above story, since the pigeon is called a pelias, the priestesses were named peleies or peliades (Ancient Greek: pleleiai, peli). Strabo believes that the name comes from the language of the Molossians and Thesproots, who also call the male elders peleious and the female ones peleias.

The Ancient Theater of Dodoni was built in the 3rdcentury BC, on the reign of Pyrros and follows the design of all the Greek theaters. Itcouldaccommodate18,000 spectators and was the greatest of its time. When the Naoioi were celebrated in honor of Naios Zeus, in addition to the races at the stage, theatrical races were also held.

The theater was destroyed and repaired twice. The first time it was destroyed by the Aetolians with King Dorimachos in 219 BC, but the following year, King Philip II of Macedonia began repairs. In 167 BC, the Roman general Emilio Paul destroyed it and by the year 31 BC. the Roman Emperor Octavian August repaired it to be used as an arena for animal fights by the Romans. The wall that is in front of the first seats was built at this time to protect viewers from the beasts.